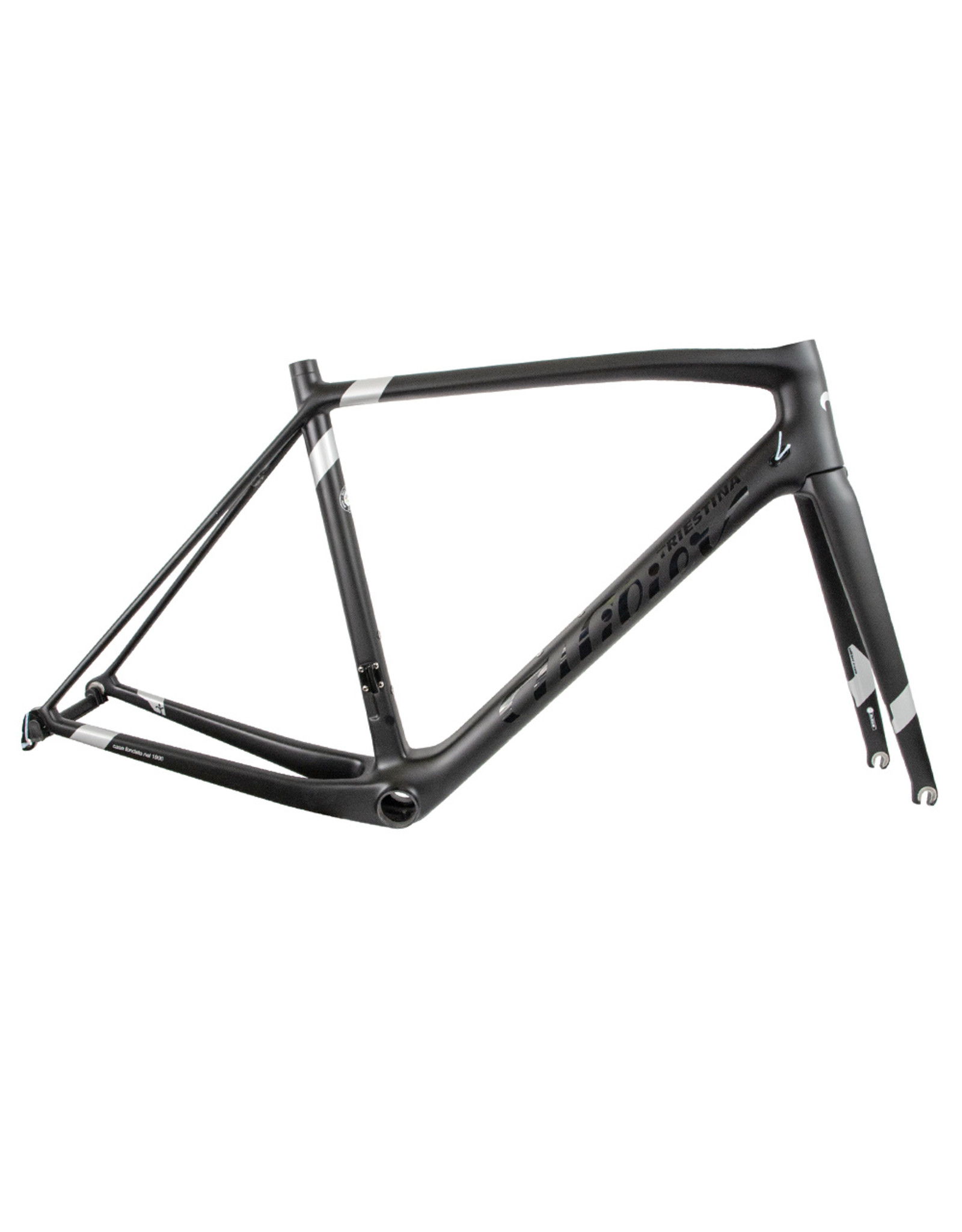 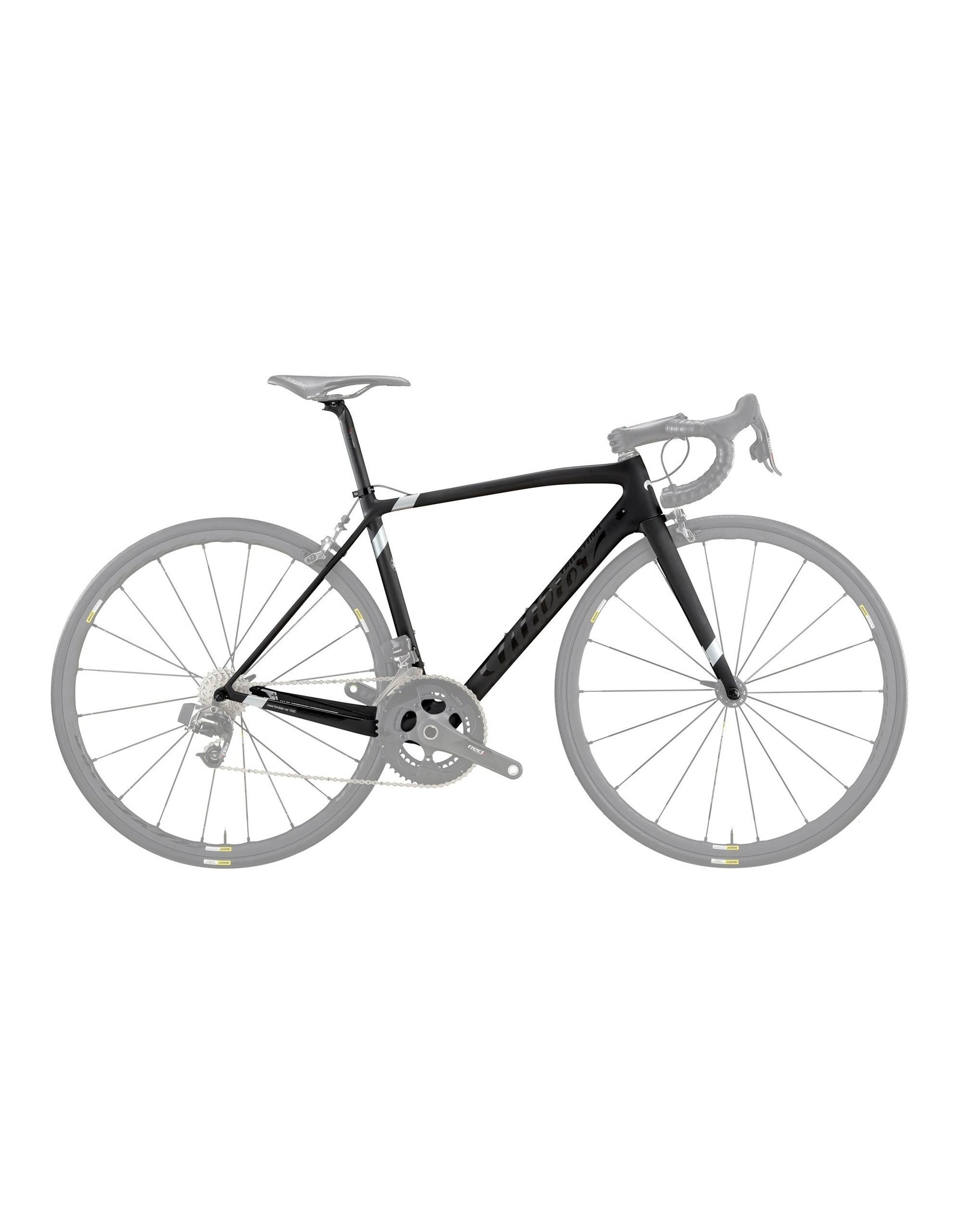 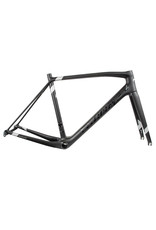 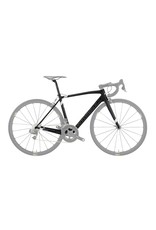 In general, it is not difficult to eliminate 100 grams from a basic frame. We have done it many times over the years. But when we had to shave 100 grams off of Zero.7, a frame that only weighs 780 grams, the going got tough, if not nearly impossible. We're talking about a 15% reduction of the total weight. In the end it was possible only by exploiting two years of dedicated research, testing, and road trials. A new carbon fiber called DIALEAD™, produced by Mitsubishi Japan, and blended with a new production process finally allowed us to reach this target weight. But the biggest challenge was to combine this lightness with the extreme maneuverability and exceptional handling that have made our products famous the whole world over. This not only involved research into reducing the weight, but also into our production process and the finest details of the construction of the frame. The Zero.6 comes with a unique matte black finishing, polished decals, and silver highlighting. Zero.6 is the the peak of Wilier Triestina technology: we achieved our goal to produce a 680 gram frame, while maintaining the handling and performance for which our products are known. In these years we tested several types of carbon, using the existing Zero.7 mould. We used different kinds of carbon and different lay-up techniques. We built and destroyed several samples. After almost two years, we finally found a way to have a super low weight, resistance, stiffness, and perfect handling, all in the same package. The breakthrough was a new carbon fiber used in combination with the tried and true 60Ton carbon used in our other high-end models, and S.E.I. FILM, used in Zero.7 and Cento10NDR. The new carbon is called DIALEAD™ from Mitsubishi Japan. The DIALEAD™ fibers are produced from a different base called PITCH, which is generally obtained by crude oil or coal. This type of fiber features High Purity and High and Ultra High modulus properties. However, using a different kind of carbon and a different lay-up technique is not the only secret of the Zero.6. That would have been too easy. The complete process had to be reinvented, inlcuding different temperature and different pressure during moulding. This new process led to another point in the long list that makes Zero.6 absolutely exclusive: we needed to start over with a new mould because we could not use the Zero.7's mould as originally planned. It didn't matter that the shape was 99% the same. The process needed a new platform to be able to produce such a special frame.

No joints, glue or screws: rear dropouts form a single unit with the lower part of the rear triangle. The joining section, usually constructed in aluminum, is also part of the carbon monocoque unit. All of this means greater lightness and stiffness. Wilier looks to every detail on our bikes to optimize performance and functionality, and our 3D Derailleur Hanger is more evidence of this. Derailleur hangers are no longer merely there to facilitate the installation of the rear derailleur. They have assumed a third dimension of functionality, seamlessly integrating different systems while simultaneously serving as cable stops. For our 3D Hangers, we dramatically increased stiffness to ensure perfect shifting and improved durability. These 2-in-1 derailleur hangers can be used with either mechanical or electronic groups. With a mechanical group setup, the cable stop is positioned closer to the derailleur itself. This enables a shorter length of housing from frame to derailleur, while still allowing for optimal cable arc, maximizing rear derailleur smoothness and consistency. When using electronic groups, the design allows the electric wiring to pass through in the cleanest way possible. The internal electric routing is optimized as well, with the wiring's point of exit positioned well above the dropout for quick and unencumbered wheel changes.

To achieve greater riding stability and aerodynamic efficiency, Wilier Triestina's engineers focused their attention and research on the front end of the frame. We found that by repositioning the down tube and the top tube with respect to the head tube, the head tube's height virtually increases. The resulting virtual rise increases torsional stiffness by 14% over the same size frame in previous versions. With this new configuration, the down tube seamlessly integrates with the crown of the fork and generates an aerodynamic profile that reduces drag. The fork's legs boast the same aerodynamic features as our aero-road and time trial models. The fork's brake hole is hidden by the down tube which keeps it clean and well protected. The resulting new design also gives the front end improved aesthetics with simple, harmonious lines.

Add your review
0 stars based on 0 reviews